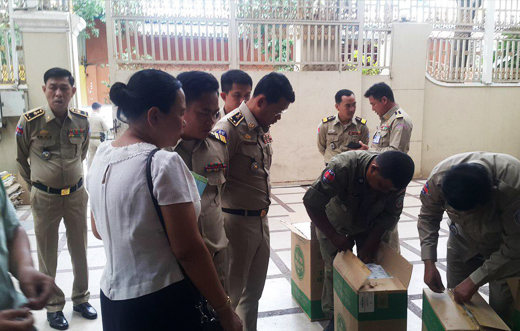 Achievements in tobacco control include

2.    The implementation of measures to ban smoking at workplaces or public area has been improved, especially in public and private establishments, hotels and restaurants. Moreover, leaders in six provinces/cities - Battambang, Siem Reap, Kampong Cham, Preah Sihanouk, Kandal and Phnom Penh - are committed to creating a smoke-free city network and to protecting Cambodia from communicable diseases, aiming at the creation of smoke-free cities in 2023.

3.    The implementation of the ban on tobacco commercials has been improved as advertisements and sponsorships by the tobacco industry on the radio, TV and in the newspapers, magazines and billboards are completely removed and prohibited. Advertisements at retail stores have been minimized but have yet to be eliminated completely.

4.    The National Center for Health Promotion works with the General Commissariat of National Police under the Ministry of Interior to visit and monitor situations at places where health warnings do not display the warning message.

5.    The mechanisms for tobacco control and law execution have been reinforced through the following:

All of these achievements would not be possible without the support and excellent cooperation and commitment of the top leadership of the Royal Government, the Tobacco Control Committee, the Ministry of Health, national institutions, international NGOs, national authority at the provincial/municipal levels, and especially the effort, commitment and support of the Minister of Health on tobacco control.

With the need for greater effort, commitment and involvement of relevant parties to prevent tobacco consumption, the National Center for Health Promotion aims to:

Share
Copy link URL
Back to the previous page